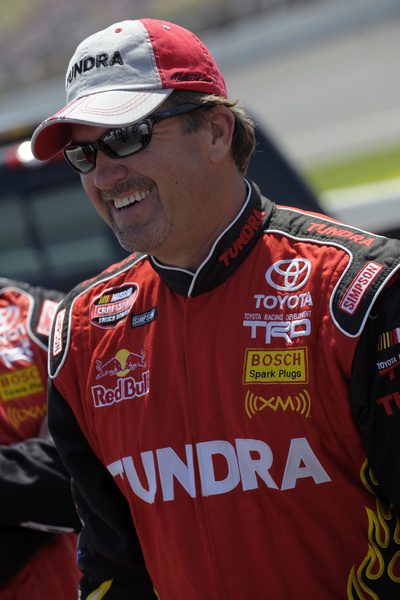 More than 40 years after making his first start, Skinner still frequents Victory Lane in everything from stock cars to NASCAR trucks both in the United States and abroad. Now semi-retired from the cockpit, the 1995 NASCAR Camping World Truck Series champion has morphed his career by becoming a television and radio personality. Today, you can find Skinner doing everything from racing his NASCAR Trucks up the hill climb course at the Goodwood Festival of Speed, to cohosting Skinner Round-Up on SiriusXM NASCAR Radio.

Skinner’s racing career began in 1975 with a wrecked Plymouth Road Racer that he purchased from the insurance company and transformed into a racecar. Competing at Susanville Speedway and other dirt tracks across his home state of California, he won three dirt track championships in the late 1970s while working as a well driller during the day and working on his racecars at night.

In today’s day and age of up-and-coming NASCAR talent with most drivers getting their first win before their high school diploma, it’s surprising to know that Skinner didn’t get his first true opportunity at NASCAR’s top division until he was 39 years old. In 1983, he moved to North Carolina to pursue his dream of being a professional racecar driver, but instead he first had to work his way up the ranks. Working as a shop hand in the engine re-build shop at Petty Enterprises and a tire changer for Rusty Wallace during Wallace’s rookie year, Skinner continued to race late models in the Southeast while searching for his big break.

Winning nearly 50% of his late model entries, Skinner teamed up with Gene Petty who asked him to run for the late model championship at Caraway Speedway in 1994. They went on to win not only that championship, but countless late model races across the Carolinas. His success on the track ultimately garnered the attention of Richard Childress, who chose Skinner as his driver for the inaugural season of the NASCAR Camping World Truck Series in 1995.

Winning the series’ first race, Skinner went on to carry the No. 3 Goodwrench Truck to 16 victories, countless pole positions and the inaugural championship, until an opportunity arose to put him in a full-time Cup ride with Richard Childress Racing in 1997. Throughout his Cup Series career, Skinner went on to win the 1997 Rookie of the Year title, six pole positions and a pair of exhibition victories in Japan.

In 2004, Skinner joined forces with Toyota to return to his favorite series—the NASCAR Truck Series. The pair went on to accomplish countless victories and pole awards until his retirement from the series. In 2013, Skinner was recognized for his accomplishments on the track, as he was inducted into the West Coast Stock Car Hall of Fame.

Skinner has done anything but slow down since his retirement from full-time NASCAR racing. Today, he joins his wife Angie Skinner as host of Skinner Round-Up on SiriusXM NASCAR Radio. He spent a season featured as “The American” on The Grand Tour – Amazon Prime’s remake of BBC’s ever-popular Top Gear.  He continues to compete on the vintage racing circuit with the Sportscar Vintage Racing Association (SVRA) and has driven NASCAR-style trucks at various races and festivals around the world. He set and improved the record for a NASCAR-style vehicle at the famed Goodwood Festival of Speed five-times over, and took home the sword (and victory!) in a Pro Late Model at the Bristol Short Track Nationals at the age of 61. He continues his philanthropic work and support through “Skinner Round-Up For Charity” events, and now, he’s lending his voice to promote brands and products through Skinner 5 Media.

Connect with Mike on Social