Skinner Round-Up Presented by Cessna Raises Over $220,000 for Hope For The Warriors 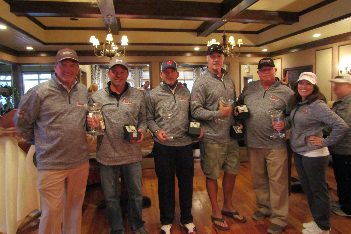 24 Oct Skinner Round-Up Presented by Cessna Raises Over $220,000 for Hope For The Warriors

LAKE TOXAWAY, N.C. (October 24, 2016) – The Skinner Round-Up presented by Cessna raised over $220,000 in support of Hope For The Warriors, a national nonprofit dedicated to restoring a sense of self, family and hope for service members, veterans and military families. Held at Mountain Falls Luxury Motorcoach Resort and Burlingame Country Club in Lake Toxaway, N.C., the event included everything from a shooting competition and golf tournament to a hoedown bash and daytime festival for service members, the community and a variety of celebrities.

“I’ve always been proud to have my name associated with the Skinner Round-Up each year, and 2016 was no different,” said Mike Skinner, 1995 NASCAR Camping World Truck Series Champion. “Angie [Skinner, wife] works so hard to plan out every detail of the event, and she has a great team of volunteers behind her helping every step of the way. Between their dedicated effort and the support of some great corporate sponsors like Cessna, Toyota, Bad Boy Off Road and E-Z-GO, we were able to exceed our fundraising goal for our friends at Hope For The Warriors. We had a group of service members present again this year, and we were able to have them golfing side-by-side with accomplished athletes, musicians and business leaders. The relationships that are formed through events like this are instrumental in continuing hope.”

10 years after the first Skinner Round-Up event was held in Daytona Beach, Fla., the event moved to a new venue in 2016 as service members, celebrities, corporate executives and the general public all flocked to Lake Toxaway, N.C., in support of Hope For The Warriors. The funds raised will be used to support Hope For The Warriors’ core programs, including health and wellness, sports and recreation, transition services, and community engagement and development.

“Mike and Angie Skinner have been advocates, supporters and friends of Hope, and those we serve, for years,” said Robin Kelleher, co-founder and president of the national nonprofit. “As we celebrate our 10th anniversary, it’s humbling to have them name us as beneficiaries of the 2016 Skinner Round-Up. Their support and the support of all those who attended the Skinner Round-Up will help us serve hundreds in need. We look forward to utilizing the funds raised from this event to empower veterans, service members and military families in our communities.”

The 2016 Skinner Round-Up once again turned into a reunion of sorts among old friends and competitors from the NASCAR Camping World Truck Series, as drivers Rick Crawford, Ron Hornaday, Jack Sprague and Mike Skinner were together for the event. Other NASCAR-related personalities who joined the group included Steve Park, Pat Patterson, Dave Moody and Bill and Gail Davis. Additionally, former NFL punter Chris Mohr and former Washington Redskins offensive linesman Ken Huff were both in attendance. Nashville-based singer/songwriters Billy Austin, Dillon Dixon and D. Vincent Williams, as well as “Nashville Blues Doctor” Stacy Mitchhart and singer/songwriter Theresa Wade, each performed for attendees throughout the event.

To learn more about Hope For The Warriors, apply for services or find out how you can get involved, visit HopeForTheWarriors.org.

About Hope For The Warriors:
Founded in 2006, Hope For The Warriors is a national nonprofit dedicated to restoring a sense of self, family and hope for post 9/11 veterans, service members and military families. Since its inception, Hope For The Warriors has served approximately 10,000 through a variety of support programs focused on transition, health and wellness, peer engagement and connections to community resources. The nonprofit’s first program, A Warrior’s Wish, has granted 151 wishes to fulfill a desire for a better quality of life or support a quest for gratifying endeavors. In addition, Run For The Warriors has captured the hearts of more than 22,000 since 2010. For more information, visit HopeForTheWarriors.org, Facebook or Twitter.