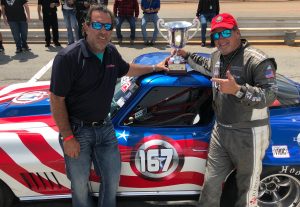 Mike Skinner (right) with Sam Lecomte owner of the 1967 Chevrolet Corvette that Skinner drove to victory lane in the 2019 VROC race at Road Atlanta.

BRASELTON, Ga. (March 30, 2019) – NASCAR Truck Series Champion Mike Skinner won the Vintage Race of Champions (VROC) Charity Pro-Am race benefitting national military nonprofit Hope For The Warriors. With a field of 14 cars where professional drivers are paired with amateur racers, the event was the first of three VROC races being hosted by Sportscar Vintage Racing Association (SVRA) with each benefitting a different charitable cause. Skinner will also compete in the VROC Series final two events being run at Indianapolis Motor Speedway in August and Virginia International Raceway in September.

“What’s cool about the VROC Series is getting to race against legends in our sport,” said Skinner. “Al Unser Jr. has always been one of my heroes and we raced for the win today. From Davey Hamilton, to Wally Dallenbach, Willy T. Ribbs, Dorsey Schroeder and Geoff Brabham—the list goes on and on. There were so many people that are icons. It’s really cool to get in these old vintage cars—they’re lumpy, they don’t drive very good, so to get out there and wheel them around this historic course is something special. Today was a day that the fastest car didn’t win; the most consistent car won and it was really great to be a part of that.”

Skinner paced the field in practice on Friday afternoon before qualifying third for the 50-minute timed race. Per series rules, Skinner’s amateur teammate, Alan Sevadjian, took the green flag in the duo’s 1967 Chevrolet Corvette owned by Sam Lecomte. With just three laps completed, Sevadjian pulled down pit road to turn the cockpit over to Skinner. The team timed their mandatory five-minute pit stop perfectly, and Skinner cycled back into the third position when all the driver changes were completed. As the race neared 30 minutes complete, Skinner moved into the second position and set a blistering pace catching the leader by approximately three seconds a lap. Trailing the leader by six tenths-of-a-second with just one lap to go, Skinner made a pass for the lead in turn 10A of the 12-turn course for his first VROC win.

With Hope For The Warriors named as the event’s beneficiary, the weekend also honored military children as the Month of the Military Child is quickly approaching in April. Timothy Colyer, the son of veteran Daniel Colyer, was paired with Skinner and Sevadjian to attend driver introductions and received a medal to recognize his service and sacrifice during the pre-race ceremony.

“Having our veterans’ children come hang out and get to enjoy this event with their parents was something really special,” Skinner continued. “SVRA, Tony Parella [CEO of SVRA] and my wife, Angie [Skinner], put in a lot of hard work with Hope For The Warriors to make this an amazing event and help raise funds to assist military families. The kids that were here today probably don’t even know who most of us are, but one day they might, and in the meantime, they were able to enjoy a great day with their families.

“Racing is a great family sport. One of my favorite things about what we’re doing today is that it gives me an opportunity to work with my sons. My youngest son, Dustin, was my crew chief this weekend, and while my oldest son, Jamie, was busy working at another track, he helps prepare all our cars before we leave the shop. Andrew Franzone—whose love of racing has made all of this possible—has helped us build a really strong race team where we’re able to race at different tracks at the same time. We get to do everything from work with young racers to develop their talent to work on vintage cars and help make them faster. To watch my boys be successful in their careers makes me really proud as a dad; which I’m sure is a feeling that those military parents could relate to today as they watched their children have medals placed around their necks by racing champions.”