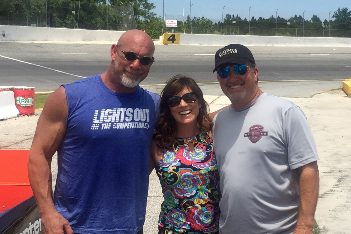 WEST SUSSEX, United Kingdom (June 22, 2016) – The Franzone-Skinner team has announced the withdrawal of celebrity Bill Goldberg from driving duties at the 2016 Goodwood Festival of Speed following an accident over the weekend. The former NFL player, and WWE and WCW World Champion, was forced with withdraw from driving duties after sustaining a knee and leg injury during a weekend standoff with a chainsaw.

“Through many years of competition I have faced very formidable opponents, but this one quickly and concisely slashed it’s way to the top of the list,” said Goldberg. “It might be Chainsaw (1) Goldberg (0), but mark my words—I’ll be back!”

Goldberg was set to participate in the 2016 Goodwood event through the three-truck operation of the Franzone-Skinner team, which brings Toyota Tundra trucks from the NASCAR Camping World Truck Series (NCWTS) to the race up the 1.16-mile hill climb course. This year, 1995 NCWTS Champion Mike Skinner will join team owner Andrew Franzone and a to-be-named driver behind the wheel of the team’s three vehicles.

“We were looking forward to having Bill Goldberg as our celebrity driver this year, but it was more than just inviting a celebrity guest for us—it was about inviting our friend and his health definitely comes first,” Skinner said. “We’re disappointed that he won’t be able to join us this year, but was promised that if we’re back here next year, he’ll be invited to come along again. However, I think he may have a few more stipulations in his driver agreement—no using chainsaws in the weeks leading up to the event, etc. We wish him a speedy recovery and we’re looking forward to racing with him in 2017.”

Hosted by Lord March at the Goodwood Estate in West Sussex, England, the Goodwood Festival of Speed features every kind of car imaginable from the 1800s through today while also attracting some of the most accomplished drivers in motorsports. This year’s Goodwood Festival of Speed will take place June 23-26, 2016. Follow MStheGunslinger on Twitter, or SkinnerRoundUp on Twitter, Facebook or Instagram for news and updates throughout the event.