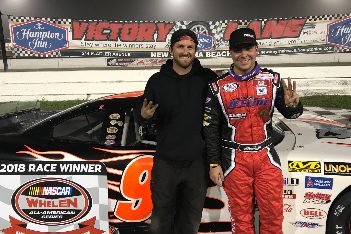 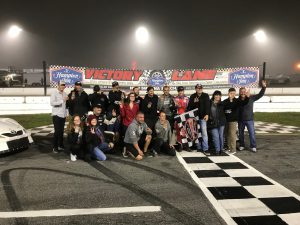 “Overall, we had a solid night again,” said Anderson. “We struggled a little bit with the car during practice, but we got it figured out for the race. We really tried to roll the top in the beginning to get the lead, and rode behind the No. 7 car for a few laps to see where he was weakest before deciding where to make my move. We struggled a little bit with the visibility, so the restarts were tough. However, all-in-all, it was a good night and I just couldn’t be more thankful for everyone at ATF & Gunslinger for making all this possible.”

Anderson started the race from the sixth position, and steadily started his charge through the field. Taking the lead by the 18th lap, Anderson fought back on several restarts as dense fog quickly settled over the speedway. With drivers unable to see the flag stand and spotters unable to see the backstretch, race officials made the decision to end the race after 25 laps.

“I’m really proud of both my sons and the whole race team at ATF & Gunslinger,” said Skinner. “I couldn’t be prouder of Cole because he’s showing so much more maturity this year than he did even a year ago. Now, we just need to keep it together for three more nights. I think he can handle the pressure—fingers crossed.”

Anderson will be back behind the wheel of the No. 97 TimberwolfPlastics.com Toyota Camry for a 35-lap feature on Thursday night. For more information about Cole Anderson, visit ColeAndersonRacing.com.