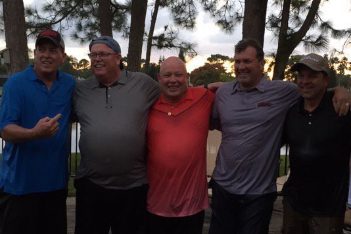 With donations still coming in, the Cessna Skinner Round-Up plans to ink a check for at least $125,000 to the Council on Aging following expenses.

“It’s always such an honor to host the Cessna Skinner Round-Up here in Volusia County,” said Mike Skinner, 1995 NASCAR Camping World Truck Series Champion and co-host of the Cessna Skinner Round-Up. “We have such great partners for this event, such as Cessna, Hard Rock Seminole, Halifax Health, Oral-B, SunTrust Bank, Toyota, National Wild Turkey Federation, Germain Motor Company, Froggy’s Saloon, Richard Childress Racing, Yuengling, American Auto, Maui Jim, Justin Boots, and so many others. It’s such an honor to have their support, and the support of all of our guests and attendees—including many people who don’t even have a direct connection to Volusia County. However, they’ve gotten behind Angie and me, and they’ve stepped up to support the Council on Aging, and that’s something that’s really special to be a part of.”

In it’s seventh year, the Skinner Round-Up has raised more than $900,000 for charity organizations within Volusia County, Fla. This year’s event solely benefitted the Council on Aging of Volusia County, an organization that promotes healthy, independent living through caring and compassionate services for the area’s seniors. The Council on Aging of Volusia County serves thousands of clients every year through meals programs, non-medical health services and senior activities.

Nearly 20 celebrities were in attendance at the event, which included a miniature reunion of some NASCAR Camping World Truck Series greats. Joining the 1995 NASCAR Camping World Truck Series (NCWTS) Champion, Mike Skinner, were Todd Bodine, Rick Crawford, Ron Hornaday and Jack Sprague. Together, the rivals turned friends account for 10 NCWTS championships and over 130 series’ wins. Also attending were Steve Park and Greg Sacks, both NASCAR drivers with wins of their own at the iconic Daytona International Speedway. Former NFL standouts Ken Huff and Chris Mohr, who have four Super Bowl appearances between their careers, were in attendance. Jack Marin, a retired NBA player who also earned All-ACC honors for Duke University during his college career, rounded out the list of professional athletes in attendance at the Cessna Skinner Round-Up.

“COA is reliant on donations to help fund our mission of serving the elderly and frail seniors in our community, and the funds raised through the Cessna Skinner Round-Up’s successful two-day event will help us continue this critical work.” said Sarah Gurtis, Chief Executive Office of Council on Aging of Volusia County. “We are so proud to have Angie Skinner on our team, and it’s been great to have Mike [Skinner, Angie’s husband] included in the deal as a bonus! We thank our local community for the great turn out and look forward to next year.”

About Cessna Skinner Round-Up:
The Cessna Skinner Round-Up is back in Daytona Beach! Returning to Volusia County after a three-year hiatus, Mike and Angie Skinner started the two-day charity event in 2005 as a way to give back to their local community. Benefitting the Council on Aging of Volusia County with two days of events, this year’s Cessna Skinner Round-Up will take place October 28-29, 2015. It will be a party in the infield on Wednesday, October 28 with the Hoedown Bash at Daytona International Speedway! The event will feature the Hard Rock Seminole Concert by Nashville Blues Doctor Stacy Mitchhart, games for all ages, the largest silent auction in Volusia County, and an all-you-can-eat Taste of Daytona event. Tickets for the Hoedown Bash are just $10 for adults, with children ages 12 and under admitted free. The party moves to Spruce Creek Country Club on Thursday, October 29 for the Skinner Round-Up Golf Tournament presented by Halifax Health. Players will take on the 18-hole par 72 course, which was named one of the ‘Top 5 Best Golf Courses in the Daytona Beach area’ by Golf Digest.

About Council on Aging of Volusia County:
For nearly 50 years, COA has been the premiere provider of services to seniors in Volusia County. Thousands of clients each year receive services such as personal care, meal preparation, housekeeping, companionship and Meals on Wheels. COA also manages Senior Centers, congregate dining sites and provides respite care programs and support groups throughout the county.

COA receives Federal and State grant dollars to provide essential services for our most at risk seniors, but also needs community support. Please help by making a tax-deductible donation to COA, volunteering or hiring us. COA offers a full range of affordable in-home services to Volusia residents of any age. Call (386) 253-4700 or visit us online at coavolusia.org.