Caymus Vineyards partners with Skinner for Goodwood Festival of Speed 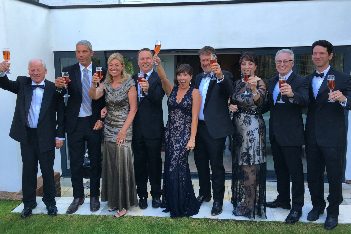 DAYTONA BEACH, Fla. (June 1, 2016) – Mike Skinner is joining forces with a longtime friend and supporter for this year’s Goodwood Festival of Speed as Caymus Vineyards partners with the former NASCAR Champion for the annual hill climb event in West Sussex, England. The vineyard’s logo will appear on Skinner’s firesuit, as well as the “Skinner Special” truck, which he will use during an attempt to win his third consecutive victory in the NASCAR class, and better the record time he first set on the famous hill climb course in 2014 and then eclipsed again in 2015. In addition, Caymus Vineyards will also be featured on the “Celebrity Truck” driven by professional athlete, WWE World Heavyweight Champion and WCW World Heavyweight Champion, Bill Goldberg.

“I am very excited to have Caymus Vineyards join us for our Goodwood effort,” said Skinner. “I’ve enjoyed their wines for many years. Much like Caymus makes first-class wines, the Goodwood Festival of Speed is a first-class event, so we can’t wait to represent them there. We have a great group of partners that we work with for this event—Cessna, Beechcraft, Bell Helicopter, Toyota, E-Z-GO, Bad Boy Buggies, Justin Boots, Charlie 1 Horse Hats, Maui Jim, SiriusXM, FocusPoint Private Capital Group, SunTrust Bank, Sentinel Real Estate, Warrington Asset Management, Florence Capital, our nonprofit beneficiary Hope For The Warriors, and now Caymus Vineyards—it’s just such a fun and special event for both myself and our team owner Andrew Franzone. Caymus wines would certainly pair well with victory, and I hope we’re all able to celebrate together at the awards ceremony that Sunday afternoon.”

Skinner’s relationship with Caymus Vineyards actually spans back to 2008 when the two celebrated together in Victory Lane at Las Vegas Motor Speedway while Skinner was racing for Bill Davis.

The June race will be a reunion of sorts, as the team will bring three NASCAR trucks to England. With team owner Franzone driving the third entry on the circuit, all three machines driven by Skinner, Goldberg and Franzone have connections to the Bill Davis Racing family.

“We are extremely pleased to support Mike Skinner in his races at Goodwood this year,” said Chuck Wagner, Owner/Winemaker of Caymus Vineyards. “We truly appreciate his patronage of our wines over the years and want to return that support. And we feel honored to be in the company of great people and organizations that support racing. Whatever the business or professional endeavor, we value the pursuit of excellence and pushing to achieve the best possible performance.”

Hosted by Lord March at the Goodwood Estate in West Sussex, England, the Goodwood Festival of Speed features every kind of car imaginable from the 1800s through today while also attracting some of the most accomplished drivers in motorsports. This year’s Goodwood Festival of Speed will take place June 23-26. Follow MStheGunslinger on Twitter, or SkinnerRoundUp on Twitter, Facebook or Instagram for news and updates throughout the event.

About Caymus Vineyards
Caymus Vineyards is located in Rutherford, a town in Napa Valley, California. It was founded in 1972 by Chuck Wagner and his parents, Charlie and Lorna Wagner. Their family comes from a long line of grape growers and winemakers, with a farming legacy in the Valley that traces back to the 1850s. Today the family is proud to showcase a collection of wines from Wagner Family of Wine that have a reputation for quality and consistency, sourced from premier wine growing regions of California namely, Caymus, Conundrum, Mer Soleil, Emmolo and Red Schooner. Caymus Special Selection Cabernet Sauvignon is the only wine in the world to have been awarded the title Wine of the Year twice by Wine Spectator magazine, an honor that the family has been working to live up to ever since.

Caymus Vineyards is on the web at www.Caymus.com, @Caymuscab, visit their Facebook page or WagnerFamilyofWine.com.