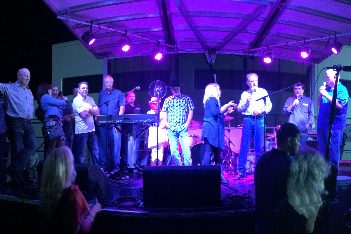 Two-Day Charity Event Benefitting the Council on Aging of Volusia County To Be Held in Daytona Beach, October 28-29

DAYTONA BEACH, Fla. (October 23, 2015) – More than 20 celebrities are expected to travel to Volusia County October 28-29 for the 2015 Cessna Skinner Round-Up benefitting the Council on Aging of Volusia County. The two-day event will feature a Hoedown Bash at Daytona International Speedway, where attendees will be able to mix and mingle with the celebrities, as well as a Golf Tournament at Spruce Creek Country Club where the celebrities will go head-to-head for bragging rights. Tickets for both events are still available.

“Angie and I always love putting together this event in Daytona Beach,” Mike Skinner, co-host of the Cessna Skinner Round-Up and 1995 NASCAR Camping World Truck Series champion, said. “We attended countless charity events while I was an active NASCAR driver, and realized if we put together an event local to Daytona Beach and kept the proceeds within Volusia County that we would be able to make a measurable difference within our community. We’ve met a lot of celebrities over the years, and it means a lot to Angie and me that these people are willing to give up their time to come support our community. A lot of them aren’t based around Daytona Beach, several don’t even have business that they do here, but they’re still willing to come support Volusia County. It’s a pretty cool event with a special group of people.”

Attending the event will be a mix of former athletes, musicians and entertainment personalities. Skinner will reunite with some of his toughest competition from the NASCAR Camping World Truck Series, as Todd Bodine, Rick Crawford, Ron Hornaday, Steve Park and Jack Sprague all attend this year’s event. Together, the rivals turned friends account for 10 series championships and over 130 wins. Also attending the event will be former NASCAR driver Greg Sacks, a Port Orange, Fla. resident and NASCAR Sprint Cup Series race winner at Daytona International Speedway. Former NFL standouts Ken Huff and Chris Mohr, who have four Super Bowl appearances between their careers, will also be in attendance. Jack Marin, a retired NBA player who also earned All-ACC honors for Duke University during his college career, will round out the list of professional athletes attending the Cessna Skinner Round-Up.

“I’m excited that the Cessna Skinner Round-Up is back in Daytona Beach,” said Rick Crawford, former NASCAR Camping World Truck Series competitor. “I’ve attended countless golf tournaments throughout the course of my career, but the Cessna Skinner Round-Up is one of the best events that I attend all year. Mike and Angie really know how to put on a class-A event, and the impact they’re able to make on Volusia County is just great. They took a little break with the event over the last few years, so I was excited when I got the phone call with my invitation this year.”

Attendees of the Cessna Skinner Round-Up will have the opportunity to meet the celebrity guests throughout the course of the event. The celebrity guests will be introduced to the crowd on the Management Resource Systems Stage at the Hoedown Bash on Wednesday, October 28, before playing golf against each other at the Skinner Round-Up Golf Tournament presented by Halifax Health on Thursday, October 29.

Tickets for the Cessna Skinner Round-Up Hoedown Bash can be pre-purchased online at MikeSkinner.com/RoundUp, or on the day of the event at Daytona International Speedway’s Williamson Blvd. entrance. The event begins at 7 p.m. ET on Wednesday, October 28, and tickets are just $10 for adults while children ages 12 and under are admitted free.

About Cessna Skinner Round-Up:
The Cessna Skinner Round-Up is back in Daytona Beach! Returning to Volusia County after a three-year hiatus, Mike and Angie Skinner started the two-day charity event in 2005 as a way to give back to their local community. Benefitting the Council on Aging of Volusia County with two days of events, this year’s Cessna Skinner Round-Up will take place October 28-29, 2015. It will be a party in the infield on Wednesday, October 28 with the Hoedown Bash at Daytona International Speedway! The event will feature the Hard Rock Seminole Concert by Nashville Blues Doctor Stacy Mitchhart, games for all ages, the largest silent auction in Volusia County, and an all-you-can-eat Taste of Daytona event. Tickets for the Hoedown Bash are just $10 for adults, with children ages 12 and under admitted free. The party moves to Spruce Creek Country Club on Thursday, October 29 for the Skinner Round-Up Golf Tournament presented by Halifax Health. Players will take on the 18-hole par 72 course, which was named one of the ‘Top 5 Best Golf Courses in the Daytona Beach area’ by Golf Digest. Individual players are still able to register for the event, with the individual player fee costing just $150. For additional information, please visit MikeSkinner.com/RoundUp.

About Council on Aging of Volusia County:
For nearly 50 years, COA has been the premiere provider of services to seniors in Volusia County. Thousands of clients each year receive services such as personal care, meal preparation, housekeeping, companionship and Meals on Wheels. COA also manages Senior Centers, congregate dining sites and provides respite care programs and support groups throughout the county.

COA receives Federal and State grant dollars to provide essential services for our most at risk seniors, but also needs community support. Please help by making a tax-deductible donation to COA, volunteering or hiring us. COA offers a full range of affordable in-home services to Volusia residents of any age. Call (386) 253-4700 or visit us online at coavolusia.org.